A java turn based strategy game for single or multiplayer space battles.

For both versions you will need javascript and java to be enabled in order to play.

(c) Ian Bolland 2001 - Please email me (ian@mammoththoughts.com) with any comments or suggestions.

Death Star Battles is a java update of the retro classic 'gravity wars' on the Amiga and IBM PC.

I was a big fan of the original gravity wars, written by Edward Bartz on the Amiga and was very surprised at the time not to find a free java clone anywhere online. As with the original and any other artillery game, the game is best experienced through multiplayer gameplay.

By selecting 2 players or more, you can battle it out on one computer in a turn based strategy style game familiar to players of the hit game 'worms'. I have changed quite a few things from the original gravity wars, the most important is that all shots fire at once so order of play is not important anymore. At the moment it has up to 12 players and 16 planets/stars. There is a selection of different scenarios ranging from basic planets or asteroids to moons, stars, red giants and supergiant stars and some really strange things like white dwarfs, black holes, white holes and wormholes. Use the buttons at the top to cycle through the options and then press start to generate a map. This may take a few seconds or so if you have selected a lot of planets and or players. If you like this game then please try my other games www.mammoththoughts.com, on some other sites this came has been called Gravity Battles, its the same game. I am currently working on a sequal called Mammoth Gravity Battles

When playing: each player uses the sliders at the bottom to select an angle and power with which to fire a projectile at the opponent's death star stations. When the desired angle and power is achieved then press the 'end turn' button to let the next station else aim and fire. When everyone has chosen the angle and power ALL the missiles are fired at once and the resulting chaos can be watched. The projectiles are effected by the gravity of the planets and stars. If you feel you are in a bad location the hyperspace button will randomly teleport you to another location at the end of that turn, this is instead of firing! Click hyperspace, which will change the display from showing your angle and power to "hyperspacing..." and then press the end turn button.

Instead of selecting angle and power with the sliders you can just click in the circle around your station. There are also keyboard controls as follows:

There are a variety of different options to chose from. Click on the buttons at the top to cycle through the options and then press the start game button to begin. 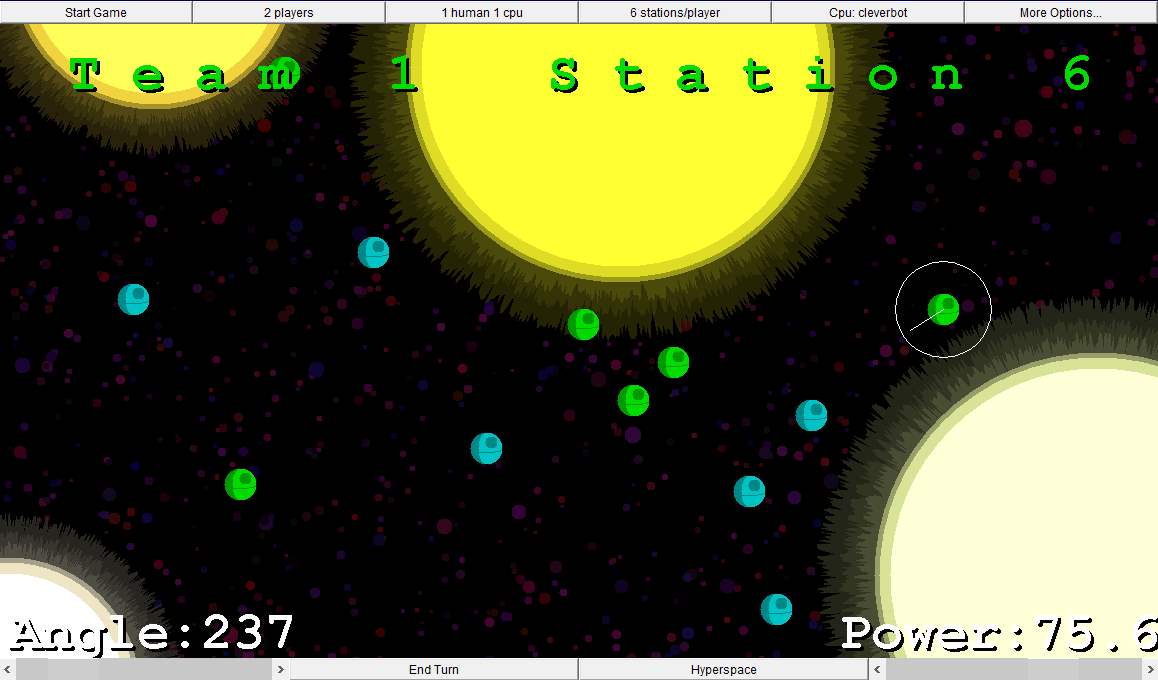 Hints and tips to fighting a better galactic war

While not being a completely educational game, it does have some learning value, teaching a little mathematicss,physics and estimation. After a little practice you learn an intuition as to the approximate trajectory of a shot.

If you find the game too easy, increase the number of planets and decrease the station size to make things harder. Also try higher level computer players (superbots or megabots). If it is too difficult, then make the stations bigger and use lower level computer player (randbots, aimbots or cleverbots). The game is most fun with another human player, remember you can play with up to 12 players, which is true chaos!

If you are having problems getting the game working, make sure the browser you are using can run java applets and javascript, and make sure java is upto date.

The game may run slowly or not at all on very very old computers, I have not tested it on pc slower than 233MHz for which is was not too bad. Try using less planets and players to improve speed.

The applet is 700 by 500 pixels and should fit comfortably on a 800 by 600 resolution screen. A large screen uses much more processor power and may need a powerful computer. If the game is really slow then consider running the game with the computer in a low resolution mode. The java applet should load quite quickly because there is no images or pictures to load, they are all generated inthe program that is only 80k in size! The game has no sound at the moment so if you are not getting sound effects that is because I haven't put any in yet. That is something I will get round to at some point, although sound effects in space, come on (but there were sound effects in the star wars movies?)!

Please note that if you use the game, you do so at your own risk. I cannot have tested the game for every platform and therefor I don't know how it will behave on your machine. Java is a very safe and secure language, at most if the game crashes it could crash your browser, but I can't be 100 percent sure. So to put it another way, you don't have permission from me to use the software unless you are prepared to do so at your own risk. If you worry about this or have any questions, please email me.

If you want to link to this game, please link to this page here, and if possible tell me you have linked here, so I can let you know if the addresses change again. Oh and those of you that can't spell I have to mention deathstar starwars dethstar deth star deathstarbattles death star duels deathstarduels gravitywars gravitybattles deathstarbattle starbattles starbattle javagame gamse stsr deaht deathstarwars tsar abttles batles battels batels edath stra stst deathstargravitywars death satr daeth and daeht or you won't find me will you? (You would be surprised at the number of incorrect spellings people come up with!!!)

I would love to hear your comments and suggestions, please email me at ian@mammoththoughts.com.